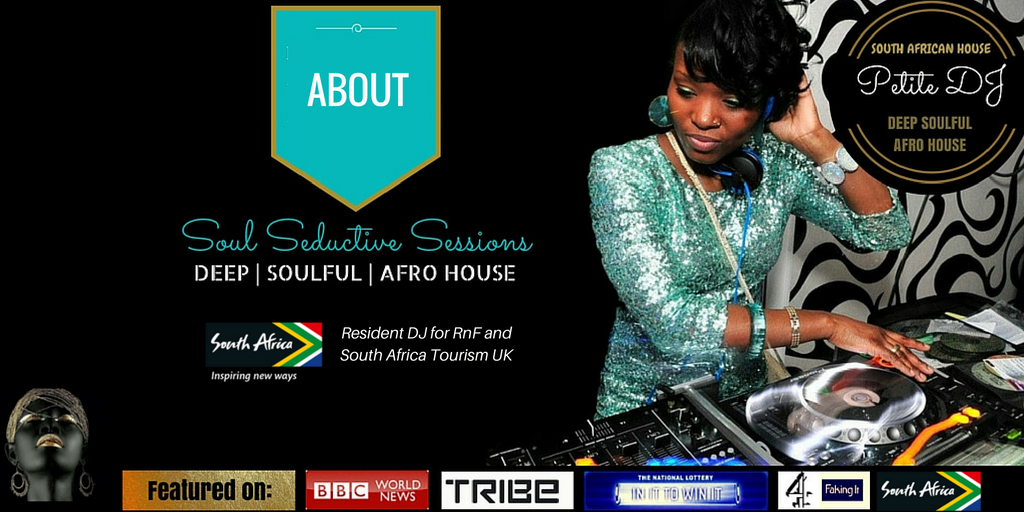 South Londoner, Tendai, goes by the name of Petite Deejay and she specialises in deejaying a blend of Deep, Soulful, Afro and South African House music.

Her vibrant and energetic DJ sets can be heard in venues and events across London including The Hilton Park Lane Hotel, Zimfest Festival, Southbank, Fashion Shows and regular spots in Shoreditch, Brixton, Vauxhall and The City, delivering her distinctive DJ sets full of drums and beats infused with sultry vocals.

Resident DJ for South Africa Tourism UK, Tendai plays a range of South African Music for audiences of all ages; from the more authentic Zulu sounds, to the 90’s Kwaito sounds, right up to the modern day South African House sounds – alongside Deep, Soulful and Afro House Music, for other Residencies including Rhythm n Funk.

Tendai has hosted several radio shows and her “Soul Seductive Sessions” mixes have been aired on shows worldwide from Romania to South Africa, including interviewing South African artists to educate listeners on the sounds she herself was heavily influenced by.  Having met her favourite Afro House music artists, including Black Coffee, Culoe De Song, Anane and Louie Vega and Boddhi Satva, and having played alongside the likes of DJeff Afrozila and Zepharin Saint, Tendai vowed to fly the flag and become one of the go to people for South African and Afro House mixes in the UK and globally online.

Tendai grew up playing Baritone, Trombone and Clarinet instruments in school choirs and assemblies during the early part of her childhood.  Her passion for music evolved to participating in Talent shows, and raving, stealing moments on the microphone from hosts and MCs; before attending DJ Academy Schools to pursue a DJ career in 2007 and 2008.

Her passion for Afro House and South African House was discovered by the BBC, where she was interviewed and featured on BBC World News about the rise in African House music in London.  She now has an ongoing following with over 250,000 listens on her mixes and followers from all over the Globe listening in and downloading her mixes daily.

After joining forces to host ‘La Mezcla’ events in The Grange Hotel with DJ colleagues and ‘The Collective’, she has continued her passion for Deejaying, playing for a host of promoters including South African Tourism UK, Rhythm n Funk, Mi Casa Es Su Casa, Tribe, Yellow, House Entertainment and many more.

Starting on vinyls, Tendai has moved to the digital era, playing prime-time slots on Underground and Digital radio stations, being interviewed by fashion bloggers and presenters, including London’s Soul Heaven resident Sy Sez on Colourful Radio, and she continues to DJ at events, festivals and fashion shows for existing and new clients.

More recently, she is running DJ classes teaching other people how to DJ and market/brand themselves effectively, her vision being that they will follow in her footsteps and beyond. The @InspiringDJs DJ School also mentors & assists existing DJs to increase their profile and engagement on mixes helping them to get their ideal bookings, residencies and demand for mixes to be played on radio shows worldwide.  Classes take place in Dalston and Peckham and on-site for organisations wishing to run DJ classes for students/employees.

Book Petite for your event here!

If you would like to send your tracks in to be featured on the next Soul Seductive Session mix, feel free to send them here

This happened yesterday.... *Knock Knock Teresa May... It's @InspiringDJs* 💫Dream BIG people💫 Speaking about my #inspiringdjs business in #DowningStreet was like a dream come true. So much planned for my prodigee DJs that love to #LearnHowToDJ and market themselves effectively! Fantastic 3 hour DJ class with my star pupil straight after. PERFECT day. Rocking my girlies clothing range #BucklesNChains Believe it Achieve it... Thank you so much to @e_nation for making it happen and introducing me as your DJ #WoopWoop youngest DJ on the block 🤣🤣🤣🤣🤣 👊 #Vision2Reality #JackCanfield #ManifestingQueen #WeManifest #LawOfAttraction #LOA #PeckhamToDowningStreet #Movements #Manifest #Intention #GoalSetter #GoalGetter #Networker #TransformationalCoach #FemaleDJ #DJteacher #MotivationalCoach #Motivate #Inspire #Peckham #GirlBoss #LadyBoss #FemaleEntrepreneur

Thanks for selecting and interviewing me @femmefataletv ♻REPOST♻ NAME: Tendai aka Petite DJ aka Manifesting Queen aka Stamina Queen ______________ HANDLE: @InspiringDJs ______________ PROFESSION: DJ Teacher, Motivational Coach, Public Speaker & Social Media Trainer ______________ HOW LONG HAVE YOU BEEN A DJ & ENTREPRENUER ?: DJ 11 years and Entrepreneur 4 years now _______________ WHO INSPIRED YOU?: All the people that said NO to me or fucked me over. I'm an innovator, I'll make my own shit happen!  Also my mum, she's so hard working.  Too hard working.  I want life to be easier for all her generations before and after her. _______________ 3 FAVOURITE DJ'S / MOGULS?: Anane Vega @ananesworld - from a small island off Africa, she has made a name and brand for herself humbly. Black Motion @RealBlackMotion- great S.African High Energy DJ & Drummer.  @Oprah She's been on this Law of Attraction movement for DECADEs - It's REAL!  ______________ BIGGEST ACHIEVEMENT TO DATE?: Sacrificing the cushy 9-5 life to chase my dreams to be a serial entrepreneur and finally discovering my life purpose!  I realised I was born to motivate people to transform their visions2reality, I'm now a lecturer at Southbank Uni and my #BlackHistory school and I'm paid to talk to people about dreaming and thinking big. And teaching women how 2 DJ at @PeckhamLevels Once you discover what your PURPOSE is, the light & alignment in your world is illuminated & limitless, I want everyone to achieve this! ________________ 3 FAVOURITE MUSICAL ARTISTS?: @hermusicofficial @xvromar + @childrenofzeusinsta _______________ WHAT’S NEXT?: Launching my DJ workshops in @MountviewLdn in Peckham alongside the Dalston premises, enabling me to teach more people how to DJ, including more of those on the #Autism spectrum.  As well as my #VisionBoard workshops in The Shard motivating people & organisations to transform their #vision2reality, to make it happen, to live their best lives. ______________ WHO IS YOUR MCM AND WHY?  It's @realblackcoffee #SouthAfricanHouse DJ & Producer flying the flag for #SouthAfricans & DJs full stop.

Delighted and honoured to be interviewed by the SETTING THE TREND podcast as part of the FIRST LADIES series.

Know your worth. The Female contribution to the Street Sounds Culture has been under-valued and under recognised throughout its growth and expansion over many years. Set The Trend decided to have a conversation about a woman’s worth to our industry with Tendai Chagweda, Cheryl Small & @lolly from New Attraction Sound. The insight is interesting, the discussion engaging but will you change your opinion or indeed do you have an opinion?

Feel free to share, like our page and contribute to the discussion. We value your feedback as we continue to chart the legacy of “The Street Sounds”.